Five Reasons to Use A Curved Treadmill

Five Reasons to Use A Curved Treadmill

A standard treadmill gives the user the opportunity to jog along at any speed without pushing their limits. The main disadvantage of the traditional treadmill is that the user doesn’t activate their entire leg as they don’t need to push back to propel themselves forward to achieve a workout.

The curved treadmill gives the user the opportunity to mimic a more natural running movement.  By pushing back as well as forward then the user has to use their hamstrings.  This means that the hamstrings are worked more than they would when using a standard treadmill.

What is a Curved Treadmill?

The curved treadmill is designed for natural human movement. It’s modern concave-shape makes it very similar to running outside as it allows the user to run with a natural style. The treadmill is powered solely by the legs, not electricity. It has no top speed and with its curved, slatted running surface, runners create a momentum to turn the treadmill belt by using the balls of their feet. This uses more muscle groups than would be the case with the traditional heal strike method on a standard treadmill.

This self-powered machine has changed the way in which people train, not only in gyms, but in sports teams, rehabilitation facilities and even at home. 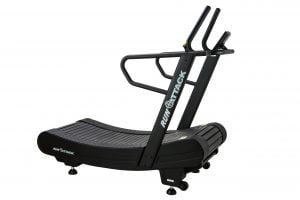 So, what are the main benefits of a Curved Treadmill?

The curved treadmill has many health and performance benefits for both end users and gym owners:

The running style on the curved treadmill creates a higher intensity workout so is perfect for interval training. Scientists measured the physiologic intensity of a standard motorised tread

mill compared to a non-motorised version and the latter demonstrating higher beneficial results overall. The process for burning calories is quite simple, increase the heart rate and keep it up for as long as possible. The curved treadmill does exactly that.
What researchers found was that runners really do work about 30 percent harder on the curved non-motorised treadmills in comparison to a standard model. Indeed, research has shown that just walking on the curved treadmill provides similar cardiovascular and caloric burn benefits as running on a conventional treadmill. The runners perceived they were working an average of 27 percent harder when they ran on the curved treadmill, and physiologically, their symptoms matched: They consumed an average of 32 percent more oxygen and had 16 percent higher heart rates, 2.5 percent higher running cadence, and 38 percent worse running economy than when they ran at equivalent speeds on a motorised treadmill.

Benefit two – A curved treadmill protects from damage to the joints

The design of the curved treadmill encourages people to run on the balls of their feet, which in turn reduces the impact on their joints and improving their running performance. There is also more core engagement due to the need to run at an

ergonomically correct angle. This forces the user to maintain a correct posture otherwise they would feel off balance which would in turn affect their run. The rubber surface of a curved treadmill helps absorb the impact on joints and connective tissue, preventing injuries often associated with running on hard surfaces. Motorised treadmills are not designed to absorb the shock, meaning that joints are taking the full impact of every step.

Why is the Run Attack different to other curved treadmills on the market?

The Run Attack is the first product allowing runners to cohesively improve their power, speed, stamina and agility, and enjoy the benefits of professional sports training in a safe, engaging and effective way.
This Run Attack is great for short, sharp HIIT sessions in particular. There is also the option to increase the resistance on the belt, so that the user can complete exercises like sled pushes to strengthen legs. The 6 different resistance levels are designed to help the user exercise with proper form and technique along with different combinations of speed and endurance.
The handle grips allow for safe use of the machine

Self-powered and simple to use

The curved treadmill is self-powered which means it very simple and quick for the runner to jump on and get started. The floor is made of rubber slats, which glide on 112 ball bearings creating minimal friction and consuming no electricity whatsoever. The workout begins with the runner shifting their body weight forward begin running and there is no further process required.

This is a versatile piece of cardiovascular equipment that has many applications:

What does the research tell us?

Researchers from the University of Essex School of Sport, Rehabilitation and Exercise Science recruited 13 male runners, all of whom had 5K PRs of 20 minutes or better. They had the runners complete four treadmill runs over a span of two weeks. The first run was a voluntary run to exhaustion, in order to define baselines for each runner’s maximum heart rate, velocity, and oxygen uptake. This run was done on a standard motorized treadmill set to a 1 percent gradient.
On the second run, the participants familiarized themselves with the curved treadmill by practicing the protocol they would follow on the third and fourth experimental runs: 4 minutes running at 5 different velocities (40, 50, 60, 70, and 80 percent of their personal maximum velocity), with 3 minutes of passive recovery between each interval.
In the final two experimental runs, they completed the intervals they practiced on the second run on a curved treadmill and a standard motorized treadmill, respectively. During the last minute of each interval, the researchers measured the runners’ oxygen uptake, respiratory exchange ratio, cadence, and heart rate, and also asked the runners to rate their perceived effort.
What researchers found was that, similar to manufacturers’ claims, runners really do work about 30 percent harder on the curved, non-motorized treadmills. The runners perceived they were working an average of 27 percent harder when they ran on the curved treadmill, and physiologically, their symptoms matched: They consumed an average of 32 percent more oxygen and had 16 percent higher heart rates, 2.5 percent higher running cadence, and 38 percent worse running economy than when they ran at equivalent speeds on the motorized treadmill.
Despite these intimidating statistics, Patrick Schoenmakers, the study’s first author, pointed out that curved treadmills have unique advantages. “Every step you take affects what the [curved] treadmill does,” he said. This means that instead of making a conscious decision to speed up or slow down and then pressing buttons to generate the speed you think you can do—as you would on a motorized treadmill—the curved treadmill allows runners to self-regulate with every footfall, just as they would outdoors. This is useful for runners who don’t like to think about their pace before or during runs, and also for scientists who want to study how athletes will react naturally to stimuli, like the instruction “run harder.”
Schoenmakers also pointed to curved treadmills as being a useful tool to practice hill running for athletes living in flat territory, noting that the machines are a great workout for the posterior chain muscles: glutes, hamstrings, calves.

Why should you consider adding a curved treadmill to a gym?

There are several reasons why a gym should consider adding a curved treadmill to their cardiovascular area. Some of the benefits include:
Adding a creative running option for members
Give members the opportunity to train on the latest innovative technology whilst discovering how they can introduce creativity their normal running routines.
The curve treadmill can also accommodate a higher spectrum of runners with no maximum or minimum speed.
Enable personal trainers to be creative when building their routines
The trainers can build a routine for their clients based around the curved treadmill. It can involve high-intensity interval sessions that allows the clients to get out what they put in.
Safer than traditional motorised treadmills
There is less friction and no heat generation due to the interaction between the belt system and the transport system.
The running deck of the treadmill has much more grip because the running surface differs fundamentally from the running belts on conventional treadmills, where cotton-nylon belts are normally used.
No wires or electricity required
Friendlier to the environment due to being completely powered by the user. This means there is a lower life-time cost of ownership due to requiring no electricity. The gym infrastructure doesn’t have to support the machines because the power supply isn’t a consideration. In addition, there is the benefit of having no wires making the gym a safer place

Corporate social responsibility
If the self-powered treadmills are implemented across a number of corporate sites, the carbon footprint will be reduced to keep helping support corporate social responsibility.
Long Service Life
A curved treadmill has a longer service life when compared to a conventional treadmill due to there being no motorized parts. Servicing costs are kept to a minimum over the lifetime of machine if regular maintenance is routinely carried out.

With any new type of fitness equipment there can be some skepticism surrounding the marketing claims. However, it is clear to see that the curved treadmill offers many advantages to the end user and gym owners when compared to a traditional motorized treadmill. The curved treadmill is very versatile, offers many legitimate training uses and is environmentally friendly due to being self-propelled.